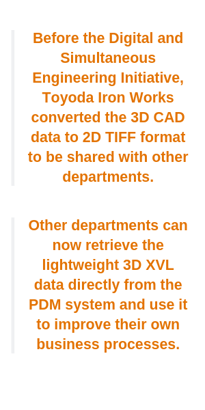 Toyoda Iron Works (TIW) started the transition from 2D to 3D (CATIA) in the 2000s. The transition was not easy. Several years later, 3D CAD and CAE had been rolled out to limited departments. During that time, there were no company-wide standards for CAD/CAE usage. Even though some departments were using 3D, lack of company-wide standards resulted in a lot of unnecessary rework in the late stages of design and production planning.

At the same time, Toyota Motor Corporation launched a "3D as the Master" initiative which included providing 3D data to suppliers like TIW. This triggered TIW to launch the Digital and Simultaneous Engineering Initiative.

The overall objective of the “D-SE Initiative” was to create a complete work environment centered on the 3D model and related data that enabled the Digital Engineering (DE) environment and to promote utilization of DE processes for design, Simultaneous Engineering (SE) and production planning. The initial goals were to:

The D-SE Initiative resulted in several projects. For example, the production management division used XVL to improve the efficiency of product packaging.