In January 2013, Beth Stackpole of Desktop Engineering published an article on how to view 3D models and work instructions in Microsoft Excel using Lattice3D Reporter version 6.0.

Since then, there have been more updates (we are now on version 7.1) to the product that have included some very powerful features. The most significant feature added in version 7.1 is the ability to create an interactive 3D PDF directly from Microsoft Excel, read more about it in this post. 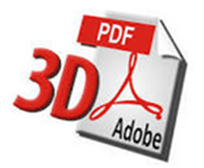 In the review, Beth wrote:

Using Lattice3D Reporter, the following can easily be embedded in any Microsoft Excel spreadsheet.

Everything Beth wrote is still true and it has been enhanced.  We are now shipping version 7.1 which contains many more features. Perhaps the most important new capability is the ability to create 3D PDFs from Excel.

This latest version of Lattice3D Reporter allows even non-CAD users to easily create rich 3D PDFs, containing interactive 3D models, directly from Lattice3D Reporter without any programming or script writing. Consumers of the 3D PDF merely need to click to open, using the free Adobe Reader they likely already have installed on their computer.  The 3D PDF file contains the interactive model and associated “rich” 3D data. “Rich” means that the geometry for a part is bi-directionally associated with a part name, process steps and snapshots.

Process for Creating a 3D PDF

The process for creating 3D PDFs or Excel spreadsheets can be automated with templates or integrated with existing ERP, PLM or other IT infrastructure processes. Using Lattice3D Reporter, it is easy and simple to incorporate rich 3D PDFs with bi-directional associativity as part of a standard documentation package. The creation of rich, interactive 3D PDF files joins these other powerful authoring capabilities for embedding information into Microsoft Excel spreadsheets:

If you would like to see how easy it is to create robust, interactive 3D spreadsheets using your own CAD model data, visit this page to request a free trial and get more information.

With the next release of Lattice3D Studio (v13.2), users will be able to create and publish 3D PDFs directly.  In addition with this release, animations can be published into the 3D PDF.